Is there a minimal amount of data required for campaign optimization? We have a definitive answer.

And that answer is always yes; an affirmative, absolute and positive yes – regardless of how much data is available.

To best see why, consider Pequod Inc., a supplier of fresh organic, locally sourced whale milk and dairy products. The marketing team sent out two email variants last week, promoting their new premium white whale crème fraiche. Each variant was sent to a hundred clients. Five of the clients who received variant A made a purchase, versus seven who received variant B. 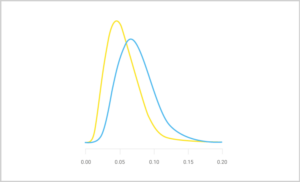 This large variance in the inferred underlying conversion rates has a devastating effect on the precision of the difference between the two variants, namely B’s performance minus A’s, which comes out way too wide for deciding on a winner: 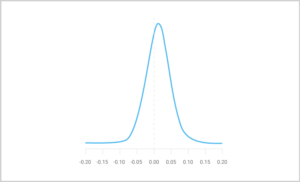 Clearly, even fairly low credible intervals include both sides of zero in this example; similarly, alternative hypotheses – that variant A outperforms B or that the underlying conversion rates are actually identical – cannot be rejected at any reasonable significance level.

Nevertheless, the probability that variant B outperforms A clocks in at over 72% (the area under the curve to the right of the dashed line at zero). Ignoring this fact altogether means Pequod will sell less of their lovely cream when the next batch of emails gets sent. Looking at the campaign and the variants as a multi-armed bandit problem, a simple strategy – Thompson sampling – presents itself as a natural way to strike a balance between exploiting the fact that variant B seems to perform better than variant A, versus exploring the possibility that, given some more data, variant A will prove itself superior. In this case, the expected improvement to the overall conversion rate of the campaign is a very respectable 7.4% when compared to continuing a 50-50 split between the variants.

Using such adaptive strategies means optimization starts long before “conclusive” results can be made. In fact, the optimization starts immediately with the launch of the campaign, and the probabilities of each variant outperforming the others are continuously updated with each new data point arriving. Even better, such strategies self-correct when variants performance changes over time, converging quickly on the new optimal split.

In other words, no matter how much data is available, one can always calculate the best next split between variants such that the expected performance is maximized throughout the lifetime of a campaign. Taking advantage of early results, neither ignoring nor overstating their uncertainty, is an easy way to boost results of any campaign – requiring no additional resources from the marketing team. So, do you have enough data to optimize your campaigns? The answer is always yes; an affirmative, absolute and positive yes.

By Tal Kedar, Optimove Posted in Optimove Tagged with Analytics

Customer data platforms (CDPs) are designed for one purpose: to unify customer data across functional and channel-specific data silos into an always-on, always processing customer profile available throughout the enterprise.

Despite all of the buzz about machine learning and AI, it's still relatively rare to see concrete examples of practical machine learning in action, much less driving real business outcomes.

Tech is keeping marketing professionals all over the world on their toes and Africa is not left out.