Different strengths are involved in the various C-suite roles, which accounts for different personalities in the CMO and CIO roles. While that could sometimes bring up opposing points of view, they need to come together to work on the martech. The CMO provides the customer data needed for driving revenue, and the CIO has to set up the IT infrastructure that can extract value from the data. When they both work together, they realize greater efficiency and impact.

The great divide between CMOs and CIOs

Not all CIOs and CMOs are succeeding in working together, according to a pair of recent Deloitte surveys. When surveying CIOs, they found that over 50 percent ranked their relationship with CMOs as “weak or very weak.” That exceeds the number — 42 percent — that said they are collaborating with marketing. CMOs don’t have a much rosier take. The majority of CMOs surveyed considered their relationship with their company’s CIOs far from strong. Less than a quarter of the CMOs identified “the CIO as a key alley and champion.”

It’s possible that the small sample size of under 200 CMOs may not be large enough to represent the groups. However, Liz Miller, senior vice president of marketing at the CMO Council, offers an explanation for the two feeling out of sync. CMOs sometimes fail to consult with CIOs in the planning stage. “That isn’t involving technology in the strategy; it’s making IT an afterthought,” she asserts, and not giving those involved in planning the tech the consideration due “valued strategic partners.”

Likewise, in a CMO.com article, Cindy Jennings cites CIOs complaining that they aren’t brought in to set clearly defined aims with input from both sides. That translates into “unrealistic schedules, reactive and poor planning, and shifting requirements that broaden a project’s scope and complexity.” When the marketing department tries to find its own solutions, it can also end up bringing in things without IT’s knowledge, as is often the case for shadow IT.

Jennings also presents the CMO’s point of view that the primary causes of failed partnerships they identify include “a shortage of technically skilled resources, insufficient funding, and a lack of support from IT.” They also find that the tech is not always up to the speed demanded by responsive marketing. In addition, she observed, she has noted “lack of effective governance, a dearth of relevant data, and resistance to organizational change” obstructing collaboration.

Then there is also the fundamental difference in outlook between CMOs and CIOs. As Jennings puts it: “Marketing thinks in campaigns and outcomes. IT, on the other hand, approaches projects from a process standpoint.” But it is possible to bridge across this divide to achieve the ends needed in today’s data-rich and responsive marketing.

Getting the two to come together

In “Successful Digital Transformation Starts With A Beautiful CMO-CIO Relationship,” Peter Horst lists three leadership behaviors that got the CMO and CIO on track to work together. The first was “collaborative decision-making,” which demanded that both sides were brought to the table. The second was “embracing ambiguity,” which entailed accepting that not everything was going to be clearly set from the start, and they would not lose sight of the forest in ticking off every individual tree. The third was “empowered decision-making, whereby choices were generally made by the people doing the work rather than at an executive level.” 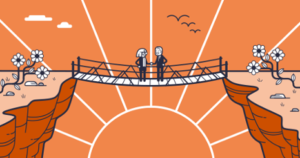 Horst’s approach is consistent with Deloitte findings dating back to 2015. The key points that emerged from the survey of C-Suite executives. One of the key findings was the primacy of “shared vision.” Like Horst’s “collaborative decision-making,” this criterion called for being sure both sides agreed to “clear marketing goals, collaborative technology selection, and a defined governance framework for data and technology access.”

The collaboration then had to extend to implementation teams, which relates to the question of who makes the decisions and how they would work through the details. “Shared responsibility helps build stronger cross-teams.” With teams made up of people from both departments, it’s possible to bring in the strengths of each in a complementary way. Marketing’s growing demands of efficiency, speed and availability then push the expectation for IT, which is there to be sure that the demands can be met with their insight into the capabilities of the technology.

As Jennings explained, the marketers can plan their campaigns around data and realize the IT department, which will “know where it is stored, how privacy is protected, if or how it’s integrated with marketing systems, the integrity of the data, and whether it can be delivered in the right format at the right time.” She likened it to the CMO’s saying what a building should look like, and the CIO coming in to be sure it can be engineered.

It is that difference of perspective between the CMO and CIO which makes them natural partners. You need the expertise in marketing vision to be counterbalanced by the expertise in technological capacity. This is the way to build the marketing campaigns of the future.

As Henry David Thoreau said, “If you have built castles in the air, your work need not be lost; that is where they should be. Now put the foundations under them.” The partnership allows the CMO to plan the castles in the air and work with the CIO to set up their foundations.

Looking to reduce your total cost of ownership and accelerate time-to-market?