Back in January, the CDP Institute published its initial Industry Profile.  We found 27 CDP vendors with combined revenue of $300 million and projected a 50% annual growth rate.  Six months have now passed and it’s time for another look.

We’ll start with everyone’s favorite buzz barometer: Google Trends.  Over-all numbers are still quite low, but there’s clearly been an uptick of interest in Customer Data Platforms since January. 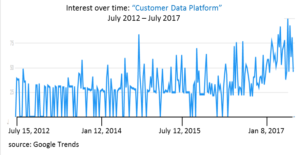 On to more detailed statistics.  The original report estimated revenue and client counts using several sources.  We felt the results were reasonably accurate in aggregate but figures for individual vendors might be significantly off.  On the other hand, investment figures came from Crunchbase and employee counts came from LinkedIn, which are both fairly reliable (although LinkedIn probably undercounts clerical staff and people outside the U.S.).   Since we now have the previous report as a baseline, we’ll just compare the changes in investment and employee counts over the six month period.  This lets us publish figures for individual companies.  Of course, there could still be errors, so don’t make any major decisions based on this information alone.

The following table compares January and July data for the original 27 vendors. 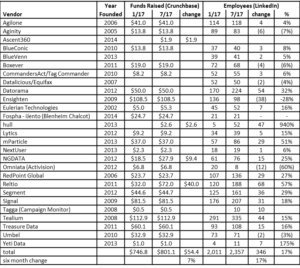 There have been several noteworthy developments:

– average employee growth was a respectable 17%, which would project to 34% over a full year.  Only two firms shrank significantly, and one of those (Omniata) was acquired, which probably means that people no longer list it as their employer.  Eight firms grew by 25% or more.

– four firms took additional funding during the period, adding $54 million in total.  That’s a modest 7% increase over the previous $747 million.  Moreoever, $40 million went to just one firm (Reltio).   Given that growth is strong, the most reasonable interpretation is probably that the main firms have enough funds on hand to support their needs.

– growth is concentrated among the bigger firms.  The five largest firms (by July 2017 headcount) accounted for 71% (249/346) of the total headcount increase.  The five largest included four of fastest growing in absolute numbers and three with the largest percentage increase.   Four of the top five also came from the tag management industry.   As with funding, the outlier was Reltio, which is only firm to enter the top five and is oriented to master data management.

– two firms were acquired: Omniata by game maker Activision and Tagga by marketing automation firm Campaign Monitor.   Two other firms on the list were already owned by larger companies: Datalicious (acquired in 2014 by data vendor Veda, which itself was bought by Equifax in 2015) and iJento (purchased by the Blenheim Chalcot investment group in 2016 and merged with Fospha).  TagCommander changed its name to Commanders Act but ownership is the same.  A day may come when CDPs are purchased by big martech vendors, but it is not this day.

In the absence of better information, we might assume that revenues grew at a similar rate to employment.  So does that mean the industry is growing closer to 34% per year than the 50% we estimated in January?

Not necessarily.  Many of these firms are well established (15 of the 27 are over five years old).  That means they may have reached the point where their revenue grows faster than then head count.

In addition, we’ve identified another 16 CDPs that weren’t on the original list.  Here are their statistics: 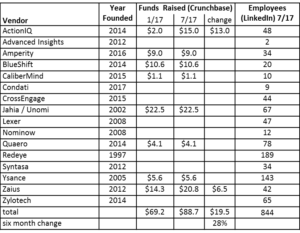 With 844 employees compared to 2,357 for the original 27 vendors, this group accounts for more than 25% of the combined industry total.   This group is younger (only four are over five years old) and taking funds at a higher rate ($19.5 million on a $69.2 million base, a 28% increase).  Based on private conversations, we know a few not yet generating any revenue, but more are in the initial hypergrowth stage.   So it’s probably safe to assume this group is growing faster than the original 27 and pulling up the combined growth rate.

Bottom line: it’s been a good half for the industry, which continues to expand and evolve in interesting directions.  Stay tuned for further adventures.

The 2017 edition of Scott Brinker's iconic Martech Landscape Supergraphic revealed that there are more than 5,000 marketing technology tools on the market today.

When technologies are young, it's common to dismiss them as niche, even when they aren't.

There was a time in the not-so-distant past when mobile communication devices felt more like science fiction than reality.