In the gaming industry, companies tend to focus their attention on players who produce most of the revenue: the biggest losers. A new Optimove research tested what happened on the second side of the scale – the players who won big – and uncovered how important they are.

We all know that 80%-20% pareto principle – 20% of customers will produce 80% of the income. This magic occurs also in the gaming industry – the benchmark shows that the top 5% of a brand’s players will produce 60% of the brand’s income. These so called ‘VIPs’ are the focus for most brands – trying to figure out how we can increase their number, and how we can get them to lose even more.

This way of thinking is right for many reasons. These big losers are the core of our income and we should invest more in this segment to make it grow. These players usually have high retention rate – they are willing to spend a lot of money on our brand and in addition they are loyal and visit us often.

Many companies tend to create marketing plans and strategies to retain the players who generate a lot of revenue with a variety of bonuses and offers, but forget, or even exclude, players who win big and generate negative net revenue. And the question we want to answer in the article is should we even treat our winners? And if so – how? We analyzed the behaviors of ‘winning’ players from 12 leading gaming brands across Europe during 2017 to come up with answers.

Smart marketers already recognized the importance of understanding their players’ experience with them. First, in order to identify a good or bad experience, thresholds are being defined – e.g. players who won more than X amount are winners and players who lost more than Y are losers. Or, in another example, using measures such as payout ratio – the total bet amount a customer won divided by the total bet amount that customer deposited. i.e. If a customer won $50 and deposited $100, his or her payout ratio is 50/100=0.5. As the number is lower the players is more of a ‘loser’. Now, the rationale behind compensating a loser make sense, but why should we give something in addition to our winners?

So, we checked. The first piece of our research shows the impact of new players experience during their first days since their initial deposit and analyze their payout ratio and their survival through the next days.

The pie charts above show that players with better payout-based-experiences have much more chances to be retained as active players – therefore, though it makes sense to compensate our losers, we can learn that we have a strong base to engage with our winning players and come out with a successful retention plan around them.

Let’s dive deeper. Take for instance the average gaming company who wants to build a VIP CRM plan. First, it needs to define who these VIPs are. In many cases, a threshold is being defined (again) by deposit amount or revenue to flag the most valuable players. In our analysis, we didn’t set up a fixed threshold, due to variance between brands, but flagged the top 5% of the players who generated the most revenue in each brand as VIPs.

At first, we checked how many of those 5% of players will remain at the top of the players list after several months. The results showed that VIPs had a very high retention rate as VIPs – 43% of them reached the top 5% again after just a month, 58% were back on the leader board after two months and 65% achieved the 5% threshold after three months. 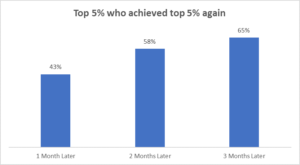 We thought it might be useful to run the same analysis with a minor change. Now our starting point would be players who reached the lowest point of the pareto chart – the lowest 5% of players who generated the most negative net revenue of the business. With the help of this analysis, we would be able to understand what the chances are of a lucky/skilled winning customer to end up as a VIP: 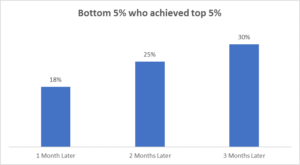 From the bar chart above we can learn that our most negative players in terms of revenue, have a high chance to make it into the top 5%. It lays at 18% after a month and reaches 30% after only three months. What does it mean? That many of your big winners will end up as your big losers nevertheless.

As we pointed out, many companies exclude these kinds of segments from their marketing plans and communication strategies. But in order to have a continued communication with our VIPs we must understand that some of them, sometimes, will win big. And also, on that note, that some of these winners will end up as losers who generate big revenues for your company. It’s important to understand this fluctuation. Here a good example, looking on that chart below: 13% of our top 5% will downgrade into the bottom 5% in just one month.

The recognition that our bottom 5% is made up of former VIPs and future VIPs will help us treat this segment with a higher respect (and with more generous offers). 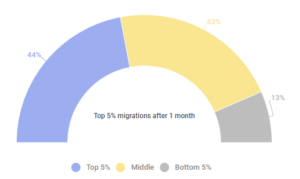 Another method that can help us understand the importance of our big winners is the net revenue that they generate. As we understand, the net revenue of the bottom 5% is the most negative it can get on each period – but what happens next? Dose this segment holds negative value after another period of time?

We must mention that there are still players who generated negative net revenue in the bottom 5% group at the following period, but as a group, it overcame the players wining by the additional losses.

The entire industry relies on players losses which drive the most important KPI – the net revenue. Nonetheless, when building CRM plans and communication flows, companies tend to forget that sometimes, our players win, and, in many cases, it is not a bad thing. Players wining drives higher retention, higher engagement with the product, reliability in the platform and at the end of the day – generate positive net revenue in the long run.

Creating funnels of communications with our winning players is not less important than target players who generate net revenue. The momentary negative value from a customer shouldn’t drives estrangement but vice a versa – a tap on the shoulder can cause positive emotions among our winning players – sharing the fact that even when they take some money from us – we are happy for them.

By Omer Liss, Optimove Posted in Optimove Tagged with Analytics, Use Cases

Global heads of technology and marketing know that having access to high quality customer data is the key to making strategic business decisions.

What does good personalized customer experience (CX) look like?